This is really strange…

This is weird. I’m playing better, way better, but things don’t seem how they should.

For starters, there’s not a lot of magic involved. I thought playing the golf of my dreams would be different. It’s not.

Sure, there’s the odd really good shot, but I’ve always done that. There’s more consistency and less really bad stuff, but for the most part I’m still the same player.

I get nervous. On the 16th yesterday I was quite nervous. But it was different. I didn’t panic and make a mess of the situation. I took a deep breath, welcomed the nerves, focused on where I wanted the ball to go and watched the ball sail to the target. It wasn’t a spectacular shot – the ball went to the fat part of the green and I two-putted for par. But normally when I get nervous like that the ball finds the water. It’s good to know I can play under pressure now.

I’m freaking out a little.

Because I’m no longer practicing as much. I’d normally spend a few hours hitting balls after work. But not this week. Hardly picked up a club, except for swinging in the backyard and a few “looseners” in the nets before play.

Shit. I’ve spent years worrying and thinking about all this stuff and it feels strange to let it all go. I’ve lost my security blanket, but I’ve just realised I don’t need it anymore.

I’m free. No longer am I trapped worrying about all these stupid things golfers like worrying about. I don’t care about the crap written in golf magazines (stopped reading them a while ago) and I couldn’t care less what Justin Rose does to hit the ball a further 24 yards. Most of this stuff is marketing hype anyway and it no longer is for me.

I’m relaxed. It’s true – golf really is only a game and the world doesn’t come to an end after a bad shot. But I learned something really important – the world doesn’t change after an excellent score. I’m still the same person, no matter what my score says or what number I have to write in the “handicap” box. I wish I had realised this sooner…

My mind is calm. No longer am I driving to the course nervous about;

No sir. I don’t care about that stuff either. I’ve simplified my approach. A lot. There’s really only a few things I do each time I take a swing.

I know all that sounds too easy but what else can we do anyway? All the other stuff is garbage and an unwanted distraction.

So I’ve been freaking out a little because golf has just gotten a whole lot easier. I’m playing way better and there’s less energy, fear and mental anguish to do so. But I’ll get used to it that’s for sure. I’m no longer a victim to the game and the hype that surrounds it.

I’m now a golfer. I swing the sticks and play the game. Frustration is a distant colleague and I’ve got something more worthwhile.

I can’t lose at golf anymore. Yep, shooting a good score is nice but there really is more to the game. I’ve figured that the four and five hours outside in the fresh air should mount to more than just frustration and anger. So I’ve left that all behind and made the craziest realisation of all…

That the less I worry, stress and panic about golf the better I play anyway.

I’m no record breaker. I’m just me, but for my talent and application I’m doing just fine. I can drive home happy because I got to play golf and it sure beats work. I can’t say the same for the guys I play with, but I see the old me in them. They’re missing out but they’re too busy trying to fix their golf swing to listen.

It really is a strange game that’s for sure.

References: If you’re keen to explore this simpler mindset further, check out this page.

Putting masterclass: How to make more of those 3 foot putts
January 21, 2020

The builder’s mentality and why it’s wrong for your golf game
January 21, 2020 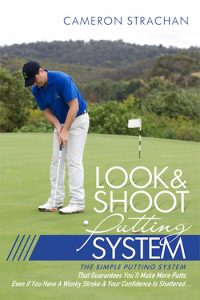